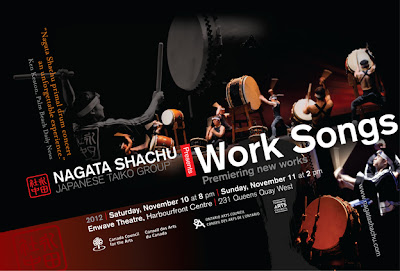 It's been a long three years since I last saw Nagata Shachu.  The growth from the group was significantly recognizable. The more elaborate costumes and story telling set the stage but as always the amazing energy, synchronicity and sheer talent kept me on my toes the whole performance.  I literally had to catch my breath after each song.  The group has been in full force for over ten years with changes and growing success.  I am grateful to have seen those changes and look forward to continuing to watch their creativity advance and develop.

Each song told a story of work and as I listened and watched intently I could see factory machines making music. The songs were composed by the group and each song embodies deep cultural significance.  The songs refer to and were inspired by different work environments and celebrations in the Japanese culture. 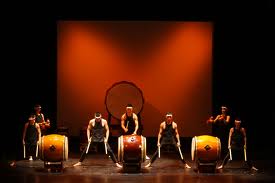 Without knowing anything prior to the show, I could feel and see how each song mimicked the rhythms in out bodies and the world around us. Each following it's own pattern yet connected. In the context of work, the individual is connected to both machines and other humans.  As for most of my creative work and personal philosophy I believe that perspective is the key.  Work can be seen as repetitive, lethargic and unfulfilling.  Imagining the group members in a rural area or in a factory I could see them breaking the walls of these ingrained negative views and using them to create music, unity and fun.

The levels and depth of their performance goes beyond ability and executes rhythmically stunning stories.  It is their ability to create music that on its own is simple, yet when put together with the combination of their drums creates elaborate patterns that grew and collapsed. 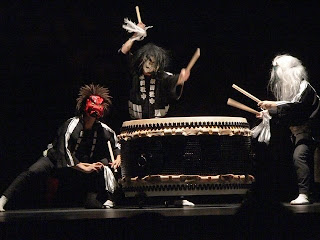 Being an artist comes naturally and with practice it evolves and strengths regardless of the medium.  Not being a musician I have such great respect for individuals, like Nagata Shachu, that can perform such complex pieces yet remain strong, energized and show such love for art form.

I look forward to seeing them again, sooner than later, especially since they have their first concert series.  You can check them out on their website, twitter or facebook.

Video Links
This video give s glimpse into the world of Nagata Shuchu.  Seeing them live truly captures the art and their ability.